Artist Anousha Payne explores her own relationship with spirituality through the characters and objects she creates, imbuing them with the energy and personality of living things. Combining ceramics with natural textiles such as snakeskin to create spellbinding ‘hybrid objects’, Anousha’s work questions the distinctions we make between human and animal, natural and manmade. We sat down with her to discuss mythology, music and what she’s been working on recently. 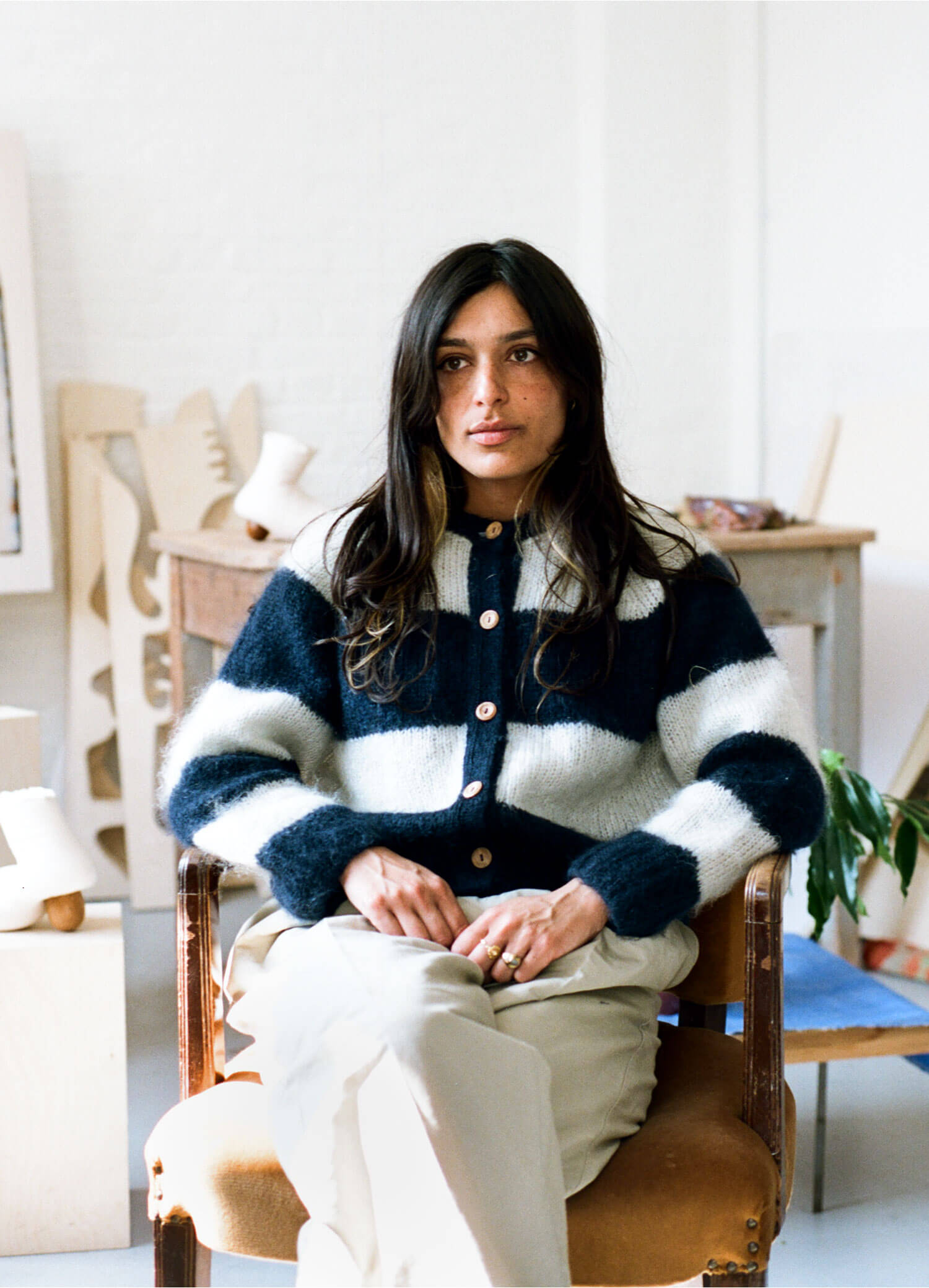 There is a strong folkloric element to your work. What is it about these kinds of stories that attract you?
It originally stemmed from me finding ways to reconnect with my heritage. I had always leaned towards modern literature but a few years ago I was given a book of Indian folk tales by A. K Ramanujan, who researched and recorded the most extensive compilation of Indian folk tales. The stories that particularly interested me were those about women with the ability to shape-shift. I’m fascinated by mythology’s ability to combine serious ethical ideas with playful storytelling, mixing moral dilemmas with magic, animism with transfiguration.

These stories carry so much history with them because they’ve been passed down through word of mouth, from generation to generation. The details change over time as individual storytellers add their own flourishes, but the fundamentals remain the same. These stories can teach us so much about human communication and the importance of storytelling. The key to all of humanity’s belief systems, caste systems, morality and communication styles are contained within these short, comical and often sad stories.

The images and objects you create almost appear to have lives and souls of their own. How does the concept of animism influence the way you relate to the things that you make?
Animism is a spiritual belief system that I’ve been interested in for a few years now, based on the idea that inanimate objects such as plants and natural phenomena possess souls. I try to get closer to it by creating sculptures and static objects that appear as though they are reaching out, in a movement or gesture. I believe that humanising and animating objects in this way allows us to get closer to the idea of them having agency or a soul. Snakeskin has become a symbol of animism for me. I use it create hybrid objects that look simultaneously human and functional, reminding us of our constant consumption through fast fashion. 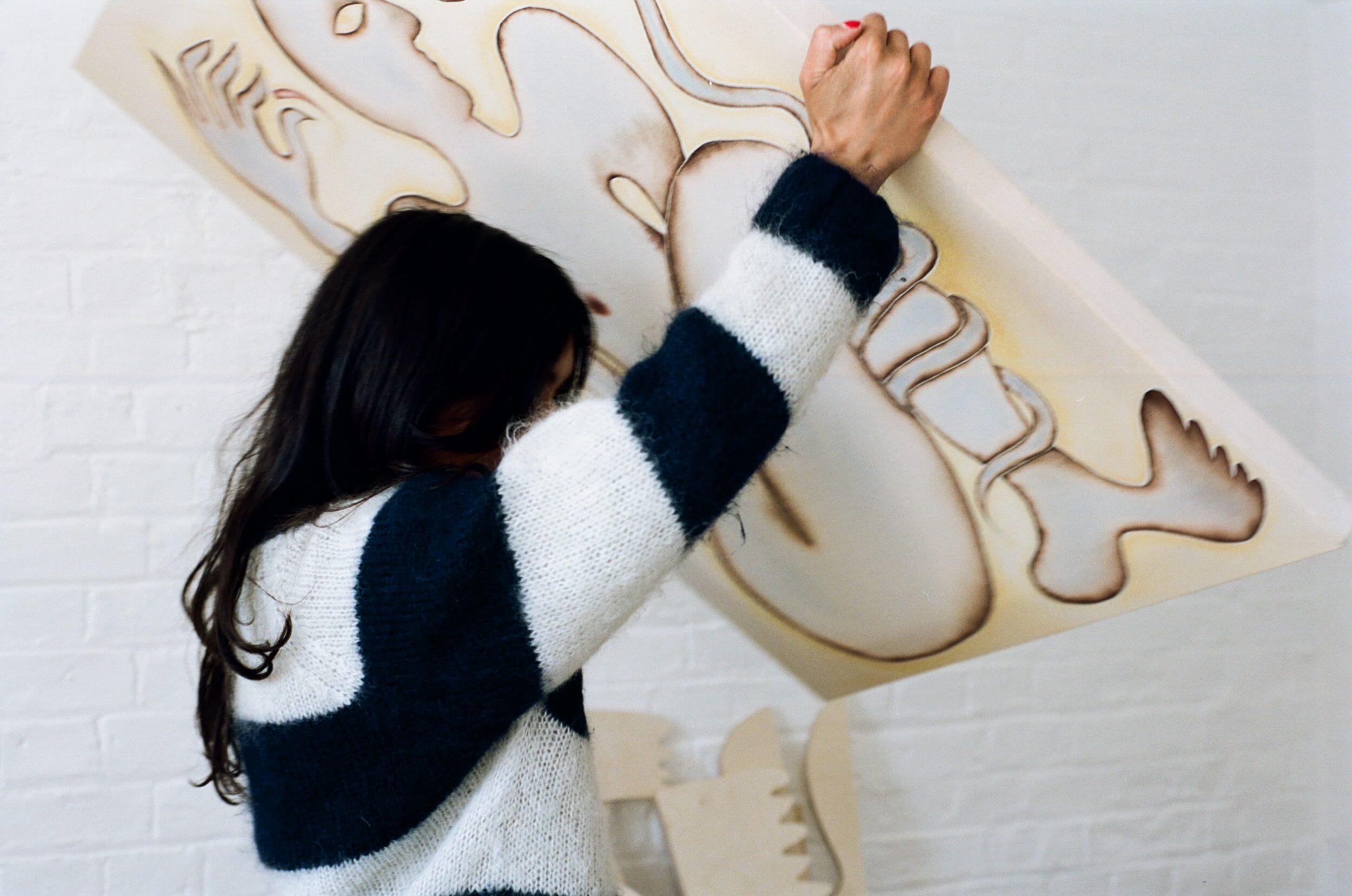 How long did it take you to find your voice as an artist?
As with most artists, my visual identity is intuitive and has always been present, however as my practise has developed through experimentation with storytelling and narrative, this identity has become clearer. There are certain materials, glazes and colour palettes whose aesthetic qualities I am continually drawn to, but the way I incorporate them has changed over time. And in turn, my use of lines in paintings and drawings have now become part of my sculpture practise.

Do you have strong feelings about how your work should be presented and experienced within a gallery space?
Part of working with galleries is learning to trust and allow the curator to guide how your work is presented. For ‘As She Laughs’, the duo show I had last year at Cooke Latham Gallery, this meant trusting my friend, Anna Perach — leaning into the collaboration whilst simultaneously being supported and trusted by the gallery. This trust allowed us to let the work and characters we were creating guide us in terms of the install. We painted shadows on the walls behind the characters to give the impression of a coven being lit by a fire, which was shielded by the central commanding figure. All of this was such an integral part of the show and wouldn’t have been possible without the understanding, encouragement and support we had from the gallery.

What are your favourite materials to work with?
I love working with clay but it can be a love-hate relationship as it is extremely fragile. Whether a piece will or will not survive can be hard to predict, but largely depends on practical things like the shape I’m making, the temperature of the room, time frame, etcetera. By comparison, I find the painting stage very soothing and predictable, almost meditative. And there is nothing more exciting than getting new work out of the kiln. 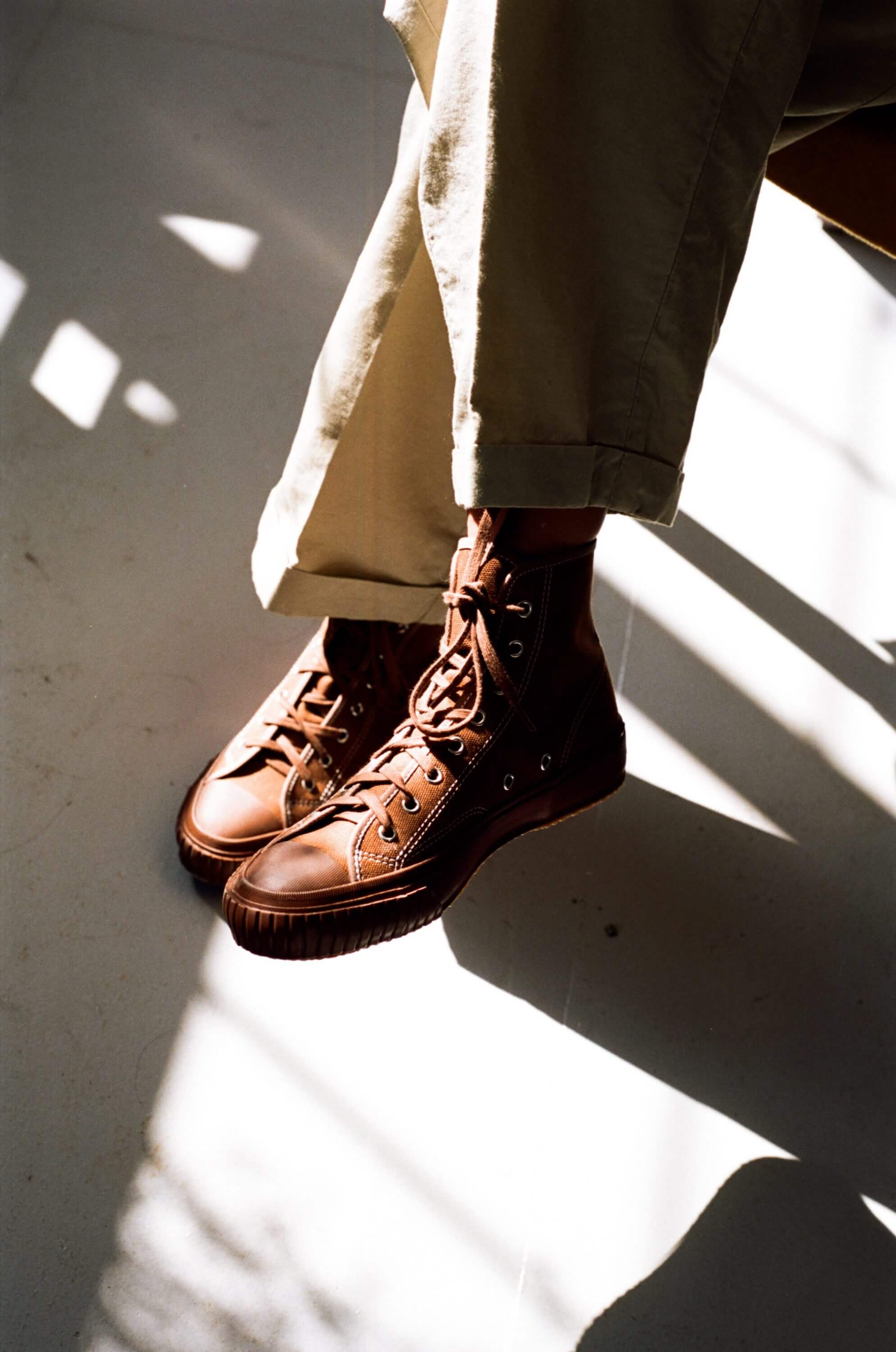 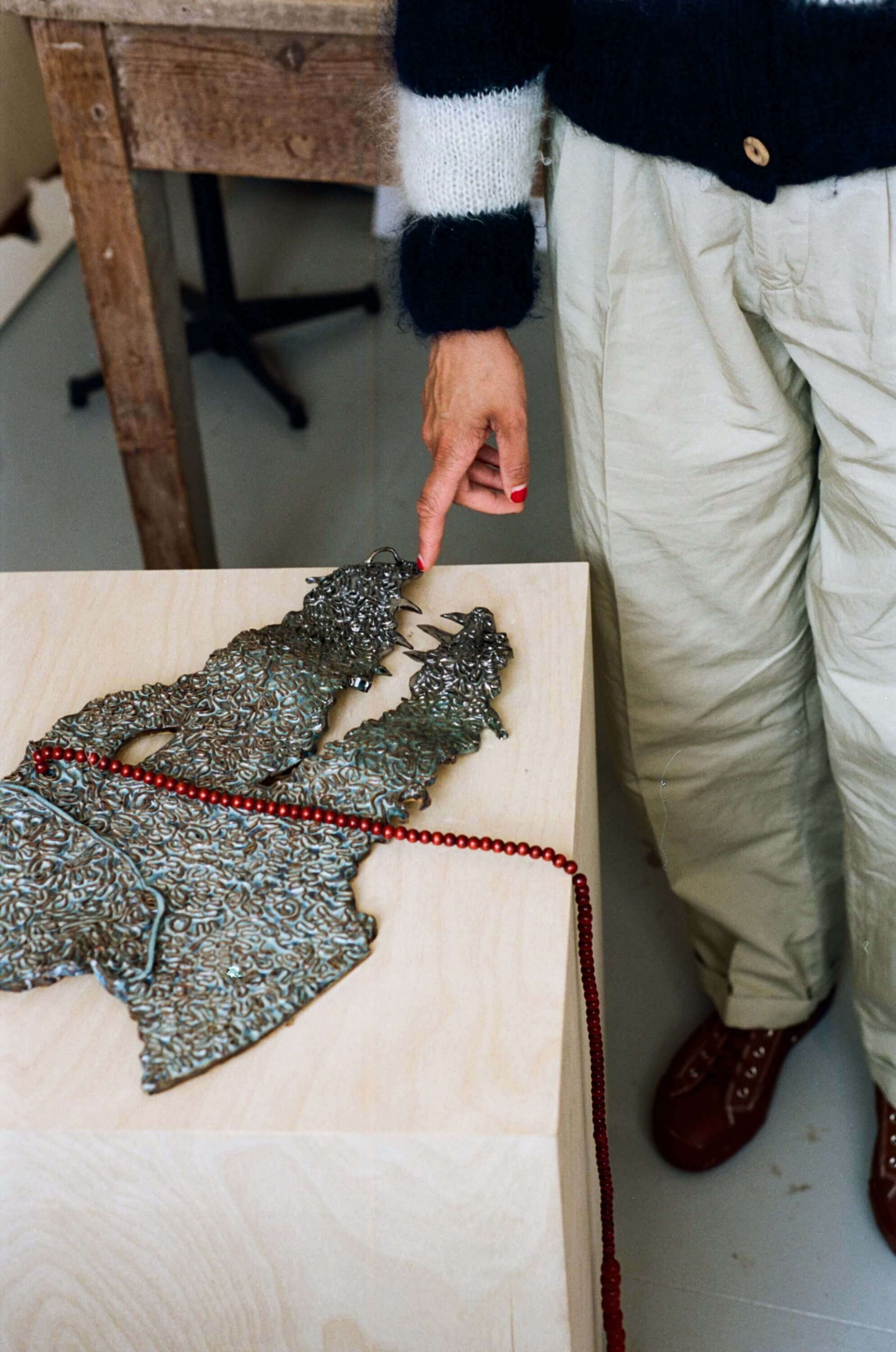 Do you listen to music while you work? If so, what have you been listening to recently?
Yes, I have the same playlist on repeat everyday. My favourite five songs of the moment are:
Descripción – Elia y Elizabeth
Raj Shanibar – Rupa
Wildfires – Sault
What you are – Pete Brandt’s Method Let Love Flow On – Sonya Spence

What do you wear when you’re working?
I have the same dirty old black hoodie and black trousers that I change into in the studio everyday. I used to wear a vintage ski suit in the winter but thankfully I’m finally in a studio that isn’t -0 degrees.

Which artists (from any time) are you currently into?
Horst Antes, Mrinalanini Mukherjee, and Sonia Ferlov Mancoba. I went to an incredible Mancoba exhibition in Copenhagen a few years ago – I love her sculptures that look like pre-historic emojis. Mukherjee created incredible totemic fabric sculptures reminiscent of hindu iconography. My favourite contemporary artists are Saelia Aparicio, Laila Tara H and Anna Perach. Laila and I have a duo show coming up at Public Gallery.

Are you a minimalist or a maximalist?
Maximalist. 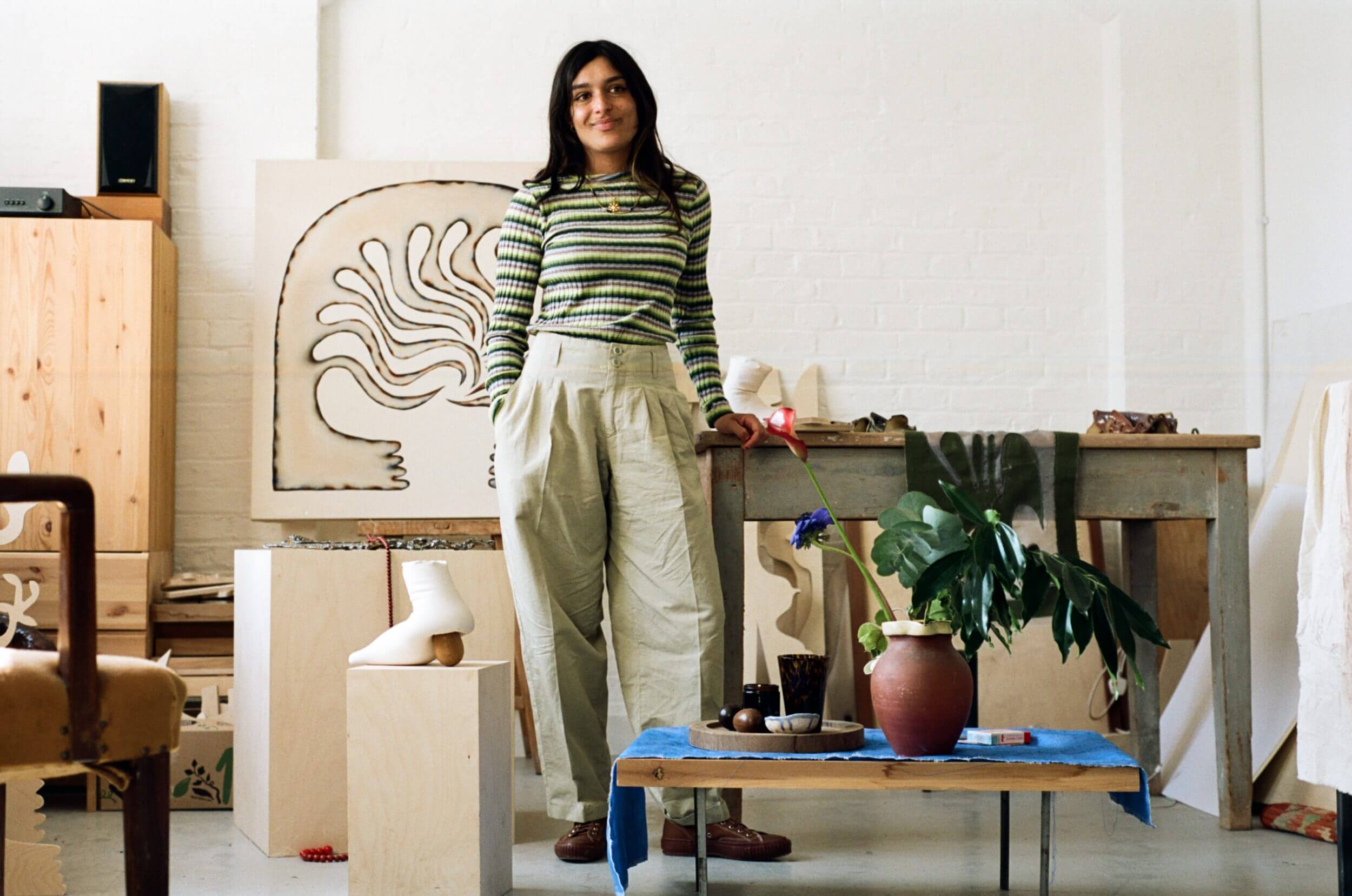 How do you relate to spirituality in your own life?
I was brought up semi-Christian. My grandfather on my mother’s side was a methodist minister (though my father was an atheist). I think, more than anything, this gave me a sense of morality but I don’t follow any secular religion or belief systems. Spirituality is important to me but my version of it is more as a sense of moral guidance regarding how we treat ourselves and others. Within my work I explore the impact of the idea of karma, cause and effect. I’m interested in how our interest in and interaction with particular objects and scenarios can impact future events.

How do you approach beginning a new work?
Between deadlines, I try to take time out to read, see exhibitions and cook. During this time I usually start to figure out the next series of works. They don’t exist separately, as I tend to become fixated by a group of characters that I gradually build upon and reimagine in varying states, objects, materials and scenarios. One work often leads to another, or they come about as groups. I find the time that I am relaxed and reading is often the time I’m able to visualise new ideas and build new narratives. 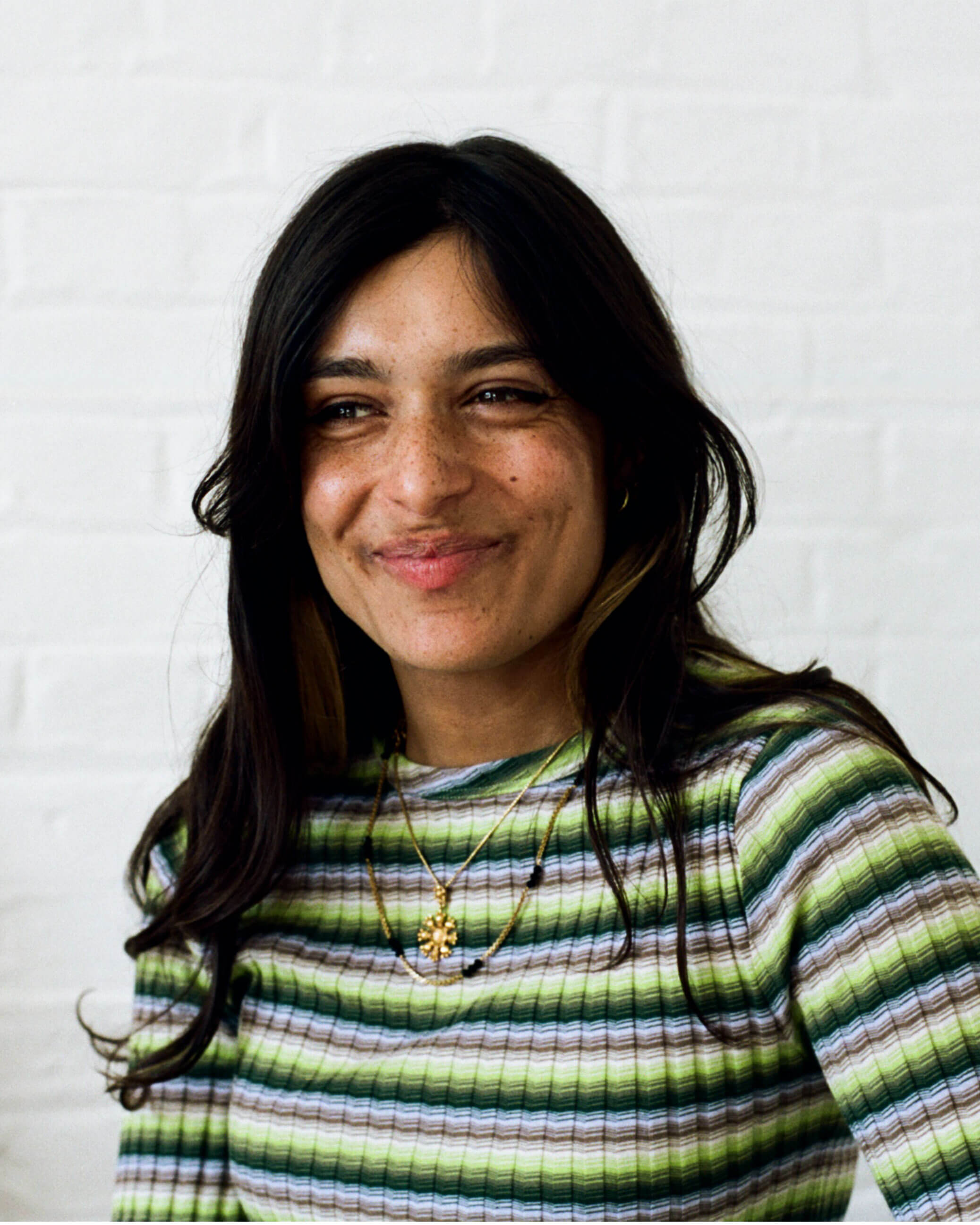 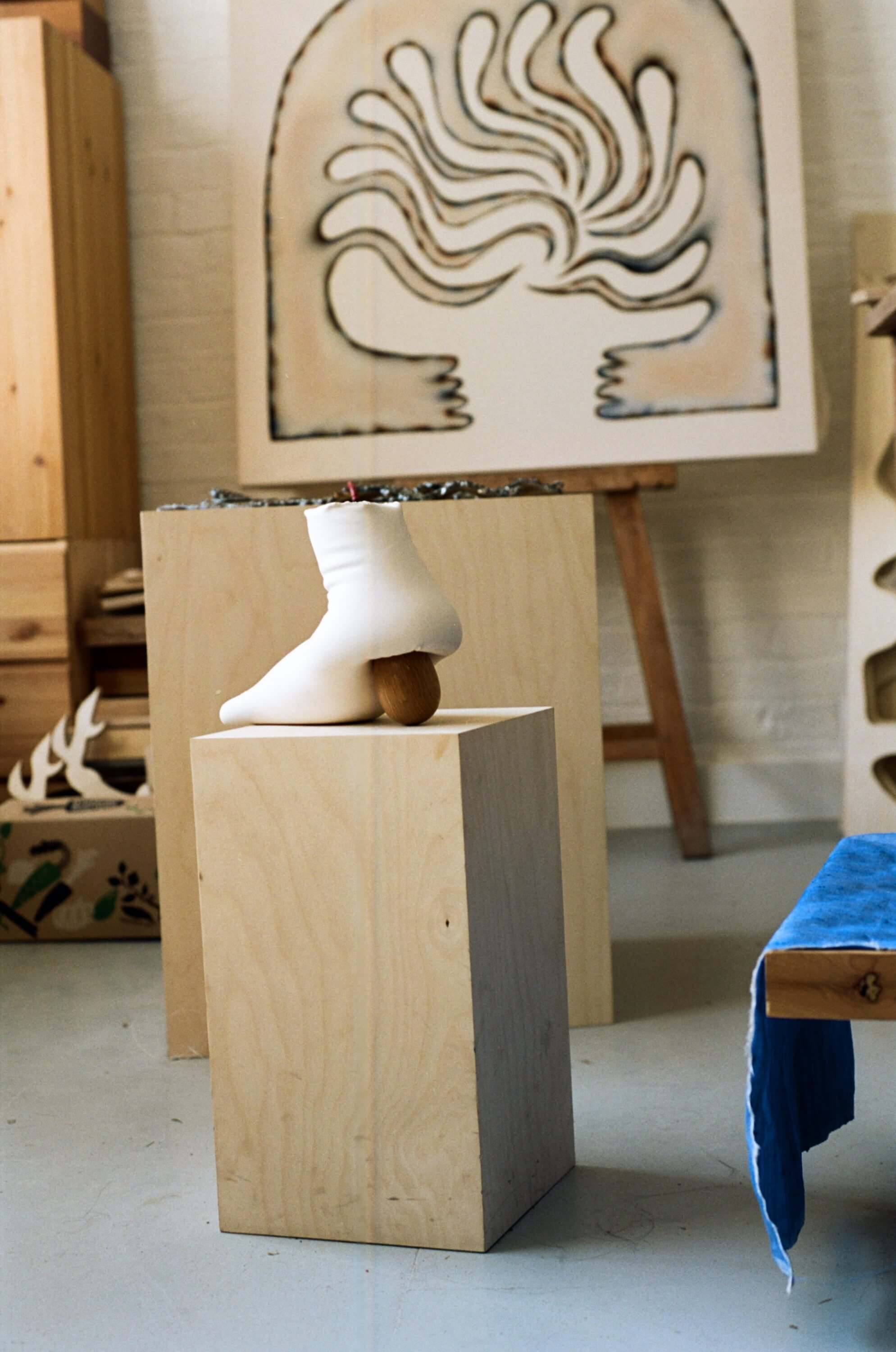 Are you ever overwhelmed by the pressure to continue creating?
Not really, as I think there’s an element of my practise that works itself out through making and material exploration, which means one work often leads to another and through processes in one work I am driven to the next. I don’t believe in constantly producing and making but I work better when I take frequent short breaks and time outs, rather than long breaks. Cooking is also a huge part of my life and something I use to process and figure things out.

What is the origin of Nourishment Projects?
Every year, I organise a fundraising exhibition and supper club under the name Nourishment Projects, which is an itinerant supper club and exhibition platform I started in 2019 with my friend Sasha Szceka. We started it as a way to raise money for a children’s home in Tamil Nadu that my grandmother helped set up over 20 years ago and we currently support 22 children in their education and living costs. This summer we will be hosting the 4th iteration.

Where were you for lockdown and how did it affect the way you worked?
I was lucky enough to have my kiln at home and a small outdoor space to work in. That really was my saviour. For the first time, I was able to work without the distraction of secondary jobs. Although it was a very anxious time, it was also one of indulgence, in that every day was mine in the studio. It allowed me to read more, which lead to me beginning to write my own narratives and short stories which have begun to feed into my work. 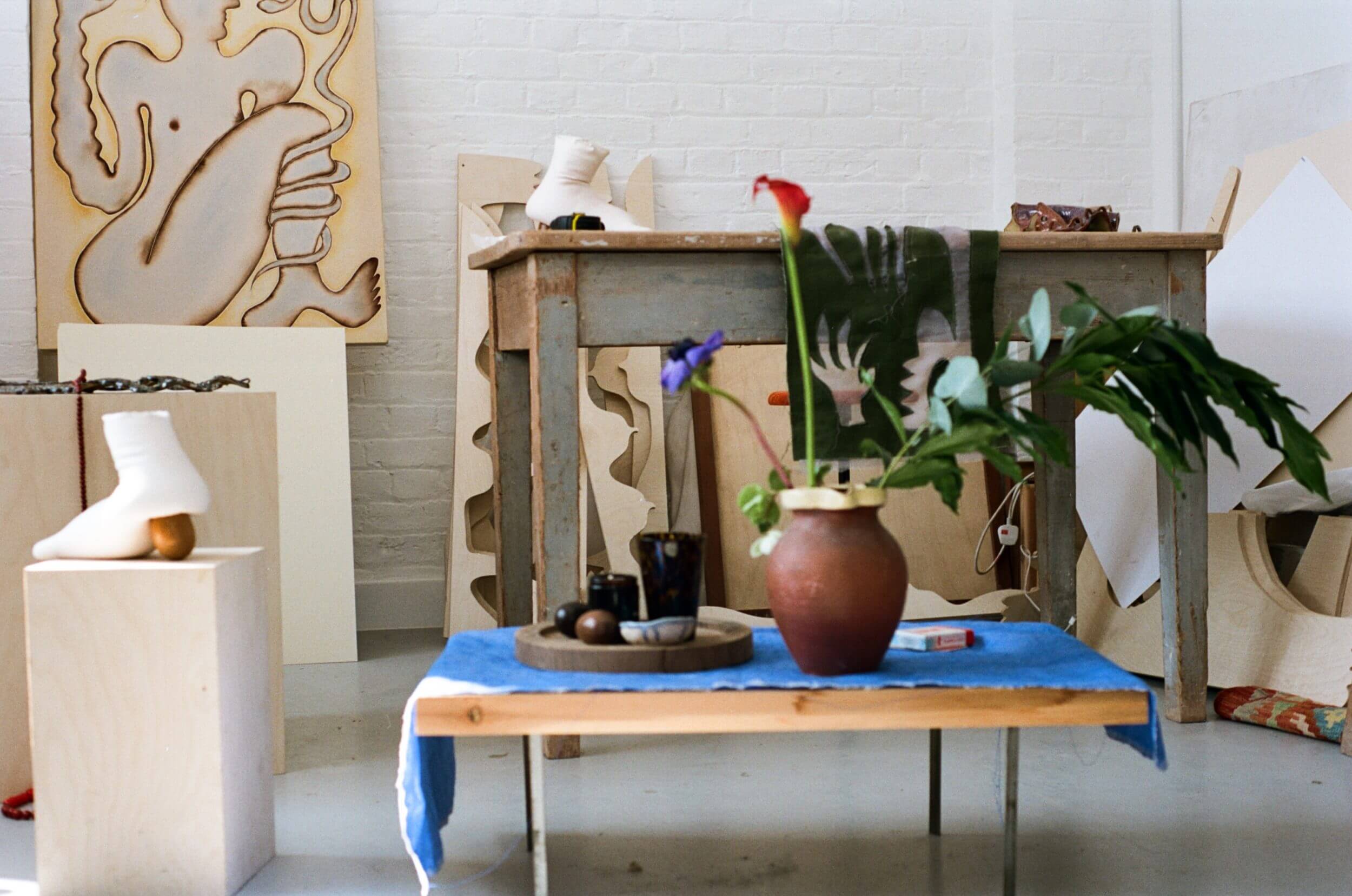 What’s next on the horizon?
I have an exhibition opening on 12th May at Public Gallery with Laila Tara H and a solo show at Stellarhighway in New York in September.

Complete this phrase: You must create… space for everyone.